If you ask a random person what myrrh is, chances are they will tell you it was one of the gifts brought to the baby Jesus by the 3 Wise Men - and that’s about it.  No one really seems to know what it is, what it was used for, or why it was thought to be a gift fit for a king.

As it turns out, there is a lot more to this little essential oil than you’d think.

Where Does It Come From?

The name myrrh is derived from the Arabic word for murr, which means "bitter", as it’s scent is sometimes bitter.   Myrrh is a natural, aromatic, sap-like resin or “gum” that is derived from the small, thorny Commiphora myrrha tree, which is related to the Frankincense tree.  Native to Egypt, myrrh is commonly used in Africa and the Middle East.

What Is Its History?

Centuries ago, much like frankincense, myrrh was valued more highly than gold. Its resin has been utilized as a perfume, incense, and medicine throughout history.  Myrrh's therapeutic properties are mentioned in the Bible, the Koran, and in ancient Egyptian, Chinese, Greek, and Roman texts. Chinese Medicine uses myrrh to treat arthritis and fractures. In India, Ayurvedic healers utilized myrrh oil for its anti-inflammatory powers, while in Ancient Egypt myrrh was used as an antiseptic.  In the Bible, it’s mentioned as a cosmetic treatment for royalty. (Queen Esther, noted as one of the most beautiful women in the Bible, used it as a beauty treatment for 6 months before marrying the king!)

Today, myrrh oil is used mostly as aromatherapy or as an added ingredient in lotions and shower gel.  However, myrrh has so many amazing benefits that seem to have been forgotten through the years, especially when it comes to your skin!

How Can I Use It?

Many historical women living in harsh dry climates used myrrh to soothe their chapped or cracked skin. It is known to be an effective cleanser that enhances the appearance of skin by moisturizing and tightening, thereby reducing and preventing further chapping, cracking and sagging. Used cosmetically or topically in general, myrrh oil works as a powerful antioxidant that maintains skin health by facilitating the fading of unwanted blemishes.  Those antioxidant properties also work wonders for anti-aging, skin rejuvenation, and stretch marks. Used daily, this oil is known to reduce the signs of aging skin, such as wrinkles and fine lines.  It also soothes skin discomforts such as itchiness and symptoms of eczema.

Mix myrrh with carrier oils such as jojoba, almond or olive oil before applying it to the skin (approx 10 drops per ounce). It can also be mixed with an unscented lotion and used directly. For vitiligo (a skin condition where patches of skin lose pigmentation), blend with sandalwood oil and apply.

Used in hair, myrrh oil’s astringency strengthens the roots and thus reduces or prevents hair loss. When applied to a dry scalp and dry hair, myrrh oil is known to address dandruff, while its scent is known to stimulate the brain and promote alertness and energy. 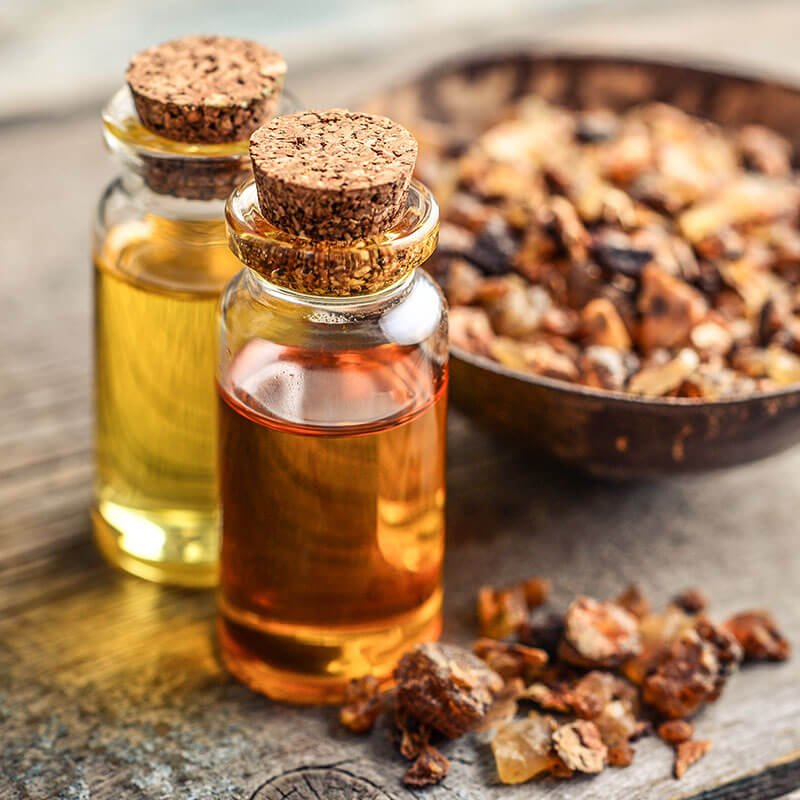 Myrrh is one of the most special essential oils you can find on the market.  As previously mentioned, it has been used for thousands of years in many different cultures.   Along with helping your skin stay moisturized, supple, and youthful, myrrh oil boosts your overall well-being and promotes feelings of harmony and peace.  If you haven’t tried this amazing, ancient oil yet, do your skin a favor and start incorporating it into your daily beauty routine today!

Get Glowing Skin with Facial Cupping